PROPERTY prices have rocketed upwards in July as the housing crisis worsens.

The scarcity of homes to buy has seen prices increase by 8.6pc in the year to July, figures from the Central Statistics Office show.

This is a three-year high, with economists suggesting there is now panic buying in the market. Dublin prices were up by 8.1pc, and prices outside Dublin rose by 9.1pc, as the market rages out of control.  The surge in prices in July represents the fastest pace of annual rises in more than three years: 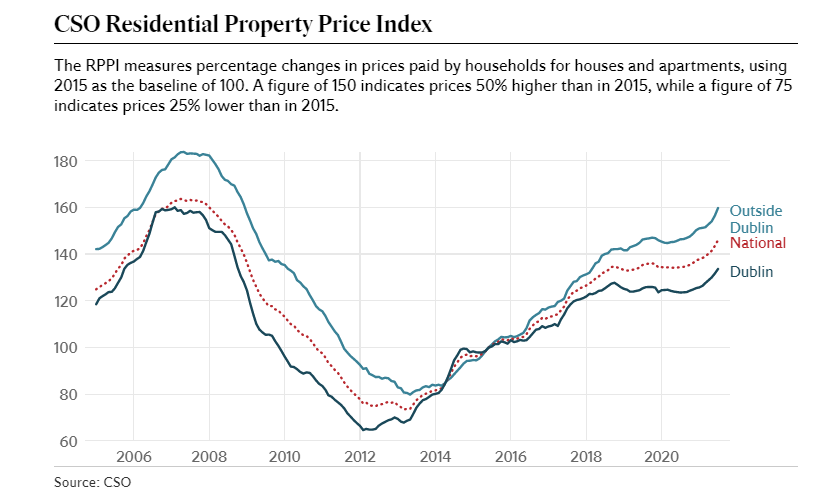 For just the month of July, prices were up by 1.7pc, the biggest increase in four years.

Economists warned that extreme price rises were in store for a while yet until higher output of new housing starts to catch up with demand.

The higher pace of price rises means more potential first-time buyers are locked out of the market, forcing them to pay sky-high rents.

CSO statistician Viacheslav Voronovich said price growth was subdued throughout most of last year, but a trend of accelerating growth emerged in the latter part of the year and into this year.

The trend of people relocating to rural areas to work from home has seen prices in the Border counties shoot up by 16pc in the past year.

At the other end of the scale, the South West saw a 5.3pc rise.

Economist with KBC Bank Austin Hughes said affordability strains and working from home are seeing particularly fast increases in areas of the country where property was comparatively cheap.

Prices overall have now doubled from the low point reached in early 2013, and now just 11pc lower than the highest level they reached in 2007.

“While supply remains curtailed, it hasn’t worsened in recent months. “So, these figures suggest home-buyer demand continues to pick up.”

He said this partly reflects the improving economy and the easing in health related restrictions.

“So, there may be some element of panic buying creeping into the market. This highlights the need to build confidence. Supply will have increase markedly in order to calm demand.”

Mr Hughes said the figures suggest translating the Government Housing For All strategy into physical properties is becoming even more urgent.

The red hot property market has seen a 50pc increase in the number of homes bought by consumers. Some 3,822 dwelling purchases by households at market prices were filed with Revenue in July.

Mr Voronovich said: “Since the latter part of 2020, the number of dwellings purchased by households have returned to pre-Covid-19 levels.

Nationwide, prices for second-hand homes are rising faster than those for new builds.

New home prices were up by 2.2pc in the three months to June. This compares with a rise over 6.7pc in prices for existing homes in the same period.

Whether you are a first time buyer, moving home, looking to switch lender , should you have any concerns about the issues raised in this article,  or investing in a buy-to-let property, why not chat to a Seaspray mortgage adviser today about finding the mortgage that’s right for you:

This content is taken from a previous article published by independent.ie on 15-09-21,written by

Seaspray Mortgages offer a wide range of products to suit our clients needs. To learn more, please submit your details, and one of our trusted advisors will contact you.

We will consider adverse impacts of investment decisions on sustainability factors in our investment and insurance-based Investment advice.
We will gather your preferences of Sustainable Investing and build them into our Statement of Suitability for you. Ultimately, it is the Product Producers we have agencies with that build the Investment Products we advise on, and it will be their documentation we are relying on when advising you on Sustainable investments. All information re Sustainable Finance Disclosures will be adhered to by the Product Producers and their brochures and documents will outline their disclosures.

Seaspray Financial Services Ltd trading as Seaspray Mortgages is regulated by the Central Bank of Ireland.

Warning – If you do not keep up your repayments you may lose your home.
Warning – You may have to pay charges if you pay off a fixed-rate loan early
Warning – If you do not meet the repayments on your loan, your account will go into arrears. This may affect your credit rating, which may limit your ability to access credit in the future
Warning – The interest rate on your loan may be adjusted by the lender from time to time. The cost of your monthly repayments may increase as a result.
Warning – If you have an interest-only mortgage the entire amount that you have borrowed will still be outstanding at the end of the interest-only period.